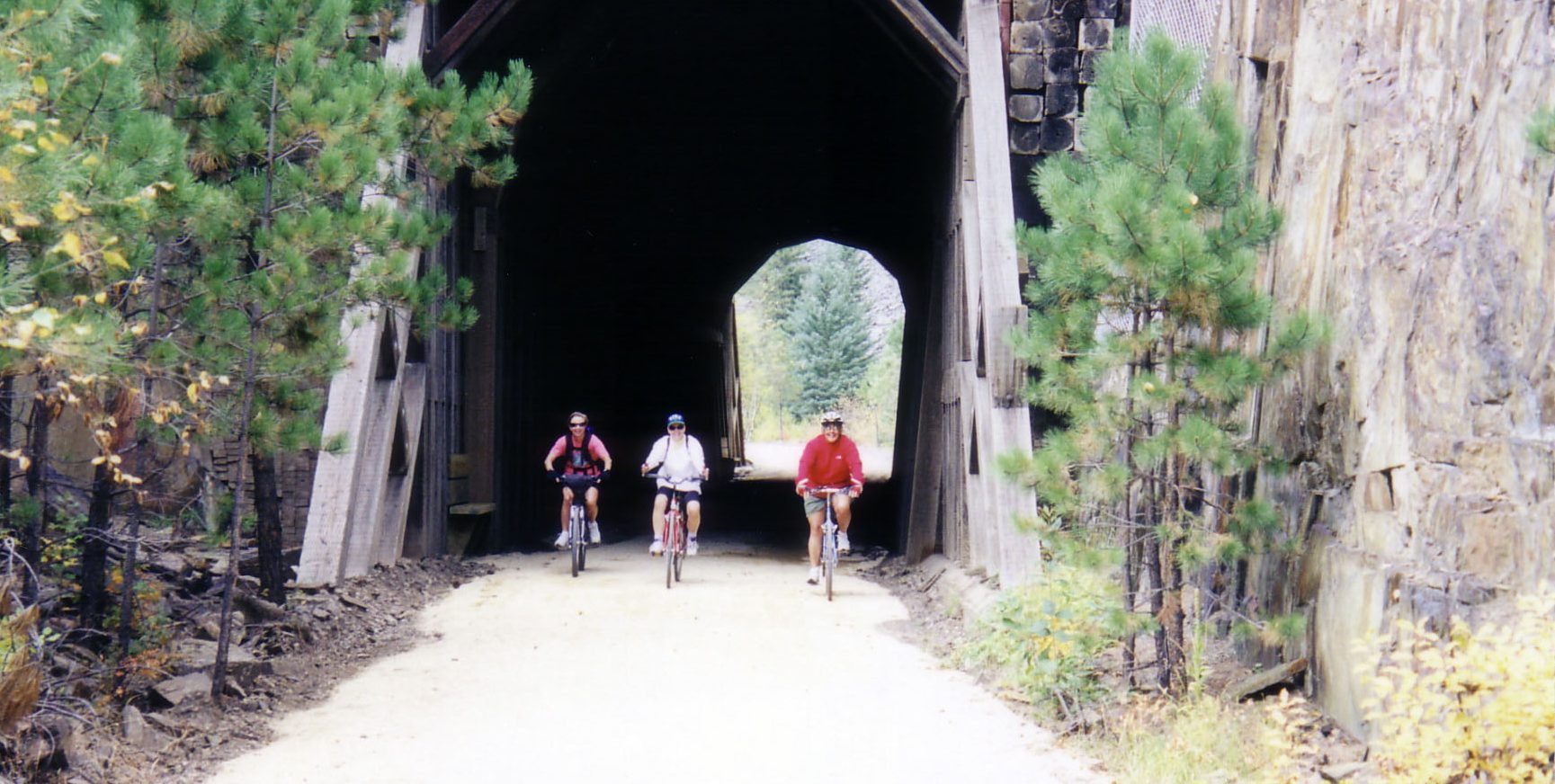 Our friends Elsa and Marc are back in Washington D.C. and busy with pulling up the last of their stakes before departing for Sweden. But there was one last adventure that occurred while they were staying with us that I have to append to what I wrote a few days ago.

It all started with deciding what to do on their last day in Montrose. Elsa had reinjured an ankle and Robin’s knees were plaguing her so that anything too vigorous was out of the question. But hey – how about hiking up one of the beautiful Dominguez Canyons? We’d done that many times before and they are easy walks, a gradual uphill going in and a gradual downhill coming back. A weather check promised basically sunny weather. Perfect!

I had talked our intrepid quartet into going up Little Dominguez Canyon this time, as Elsa had already hiked Big Dominguez Canyon. To do it you have to cross the shallow creeks, which is where the fun came in later on. Sunscreen was lathered on, daypacks were adjusted, boots were laced. We took beaucoup water with us, this being a desert walk and all, and off we went. Our endpoint for this journey was an abandoned settler’s cabin about three miles in. The plan included eating a trail lunch there before turning around and coming out.

But a clear sky quickly clouded up, and an occasional raindrop fell on us as we approached the cabin. Then came the thunder. My first thought was: “How cool if we were rained on, here in the desert. How rare is that?” The few raindrops became a steady patter and we moved under the eaves, which afforded some shelter.

Over the next ten minutes the rain intensified, and the thunder became a steady roaring. Finally we had a full-on cloudburst going, with a cold west wind blowing the rain horizontally and right through us. We moved to the eastern side of the building where we could move the Index of Miserability needle back to four from the chilly eight that it had become. I found a window that was loose and planned that if anyone began to show even the slightest sign of hypothermia we would break into the cabin (illegal, even in Colorado) to sit the storm out. But after forty minutes of this outstanding performance by Mother Nature, the rain stopped and the sun came back out. We then struck out for the return trip.

But what a changed landscape we faced! Across the valley we saw dozens of waterfalls on the cliff faces that hadn’t been there before. New creeks had appeared in the dry washes we passed hiking in, creeks that were deep enough and currents that were strong enough to pose obstacles. And then we came back to the Little Dominguez Creek. It had gone from a sleepy small stream that you could easily hop across to an impassable torrent that was now thirty feet wide. The ground underfoot was now a sandy mud in the places between the rocks.

On the return trip we moved more slowly as our boots were waterlogged and twice as heavy as when we walked in. We needed someplace safe to cross the creek, and walked up and down the shore of the stream looking for such a spot. The group was almost resigned to sitting on the banks and waiting out the hours it might take for the stream to subside when I decided to attempt a crossing at an area that looked halfway promising. I used my hiking poles and picked my sorry self across, the water up to my knees. But while it had looked intimidating, it all turned out to be completely do-able. When I was safely on the far side, Robin made her own crossing, and when she also was successful, we tossed our poles back across the creek to Elsa and Marc for them to use. In no time at all the four of us were heading away from the creek with no more water crossings to worry about.

The last part of the hike was tedious but otherwise unremarkable. A stop at the Dairy Queen in Delta on the drive home seemed the right thing to do, and we staggered in the door. Other customers present looked at our dirty and bedraggled selves and pulled their children closer in for safety. Finally, at long last we were home, rinsing the mud from both the outside and the inside of our boots, showering, and finding dry clothing to cover sore muscles and aching joints. The consensus was that we had spent the day having Type II fun.

Type I Fun – true fun, enjoyable while it’s happening and fun in the recollection.

Type II Fun – fun only in retrospect, hateful while it’s happening. But all those good stories to tell over future fires …

Type III Fun – not fun at all, not even in retrospect. As in, what the hell was I thinking!

Truth is, you never really know what sort of “fun” you’re getting yourself into when you start out. Our start was a sunny day with no bad weather predicted. It finished up with a downpour and flooding everywhere on the valley floor. There was one part of the adventure that was Type I fun all the way, at least for me. The sound of the thunder. Those cracks and explosions reverberating across the canyon were the kind of music that goes straight to the spirit. An awesome and fearsome symphony … we were so lucky to have experienced it.

Robin and I were sitting out on the back deck wasting time with each other, this being one of the most valuable things we do. We had some music going in the background and when “Boulder to Birmingham” began to play I went into full recollection mode. I first heard the song in 1975 when I was introduced to the beautiful voice of Emmylou Harris. That line – “I would walk all the way … “ has such loneliness in it, such a sense of loss. Listening is like walking in a shadowed corridor and hearing the whispered voice of someone you will not see again.

“Boulder to Birmingham” is a song written by Emmylou Harris and Bill Danoff which first appeared on Harris’s 1975 album Pieces of the Sky. It has served as something of a signature tune for the artist and recounts her feelings of grief in the years following the death of country rock star and mentor Gram Parsons. Early in her career, Harris toured with Gram Parsons and sang on his two solo albums GP and the posthumously released Grievous Angel. The song is known for its chorus “I would rock my soul in the bosom of Abraham/I would hold my life in his saving grace/I would walk all the way from Boulder to Birmingham/If I thought I could see, I could see your face.” Harris did not write again about Parsons’ death in such a direct way until “The Road”, a track from her 2011 album Hard Bargain, although “Michaelangelo” from Red Dirt Girl certainly appears to be about Parsons too.

I think those three songs (and the decades between them) are one of the best testaments to the durability of love that I’ve ever encountered. It is a poorly kept secret that I admire Ms. Harris’ music greatly. Her catalog contains songs to match any moment, sentiment, or experience I’ve ever had. As I keep repeating, she is a class act.

It was so pleasant looking across the table at my granddaughter these past days and thinking back on the times the circles of our lives have overlapped as in some fluid Venn diagram. I don’t recall exactly at what point in my life I realized that when I was looking at my children I was seeing them as they were at that moment and somehow as they had been all of their lives, at once. It turns out to be true for grandchildren as well.